Research into the use of Turmeric to treat animals

CURCUPET-K9 from K9health has been developed in response to a trend where pet owners were taking it upon themselves to give their pets human purposed turmeric. Perhaps as a result of hearing about the research presented below. These people experienced the benefits for themselves.

So at K9health, we thought we would make something just for dogs. Please read the summary below and click the link at the bottom for the full research.

Nutrigenomic activity of plant derived compounds in health and disease: Results of a dietary intervention study in dogs

CURCUPET-K9 from K9health contains a bioavailable form of curcumin. Curcumin, along with the curcuminoids desmethoxycurcumin and bisdemethoxycurcumin, is the main component of turmeric. Although curcumin is usually referred to as the key active ingredient in turmeric, the presence of the other curcuminoids is necessary to achieve full therapeutic potential1.

Turmeric has antioxidant and anti-inflammatory properties that have been shown to have a therapeutic effect on arthritis and joint pain, neurodegenerative disorders and supportive care for cancer treatment, among other conditions.

Most of the therapeutic benefits of curcumin seem to relate to its antioxidant and anti-inflammatory effects. Curcumin has been shown to increase activity of antioxidant enzymes such as superoxide dismutase (SOD) and catalase, as well as scavenge and neutralise free radicals2. Curcumin has been shown to block activation of Nuclear factor-κB (NF-κB), a transcription factor that is responsible for activating a variety of inflammatory signals, including inflammatory cytokines (TNFα, IL-6) and inflammatory enzymes like COX-2.

Despite the evidence of the effectiveness of curcuminoids as anti-inflammatory agents with a wide range of clinical applications, in their raw state, curcuminoids are not easily absorbed by the body: they are not bioavailable.

One of the reasons that curcuminoids are poorly absorbed is because they are not soluble in water and only poorly soluble in lipophilic solvents. In Indian food, turmeric is generally cooked with animal or plant fats such as butter or coconut oil. In traditional Indian medical use, turmeric is often diluted in warm milk. Putting turmeric into a lipolytic – or fatty – matrix in this way provides the means for the curcuminoids within turmeric to be absorbed by the body.

CURCUPET-K9 from K9health contains a mix of curcuminoids, soy lecithin and microcellulose that has been formulated into a patented phytosomal composition to improve absorption, mimicking the way it has traditionally been consumed in Indian medicine. In this formulation (called CurcuVet®), curcumin and lecithin don’t form a compound, but rather a dispersion similar to mayonnaise: the curcumin molecules are dispersed in the lecithin molecules, allowing for an optimal absorption.

CurcuVet® has the same composition as Meriva®, but it has been certified for animal consumption.

The bioavailability of this curcumin phytosome complex was first tested in rats. When compared to standard unformulated curcumin, levels in plasma of rats were fivefold higher after Meriva® oral administration3.

Key players in the pathogenesis of osteoarthritis are pro-inflammatory cytokines, which have been shown to be transcriptionally downregulated by curcumin in in vitro studies.

Osteoarthritis is the most common source of chronic pain in older dogs. Arthritis commonly affects large breed dogs such as German Shepherds or Labradors Retrievers more than small breed dogs. Moreover, older dogs are at higher risk: it is suggested that more than 50% of diagnosed dogs are aged from 8-13 years. Dogs with arthritis tend to be lethargic, have difficulty moving from a sitting or lying position, stiffness and visible pain5.

Traditional tests for pain and inflammation cannot be used in veterinary studies; an objective and unbiased method that can be easily used is measurement of expression levels of genes associated with inflammation.

CurcuVet® was orally administrated during 15 days to 7 adult mares, affected by chronic osteoarthritis, and to 5 foals, affected by osteochondrosis6. Changes in expression of inflammatory genes were determined by RT-PCR (real time PCR). In the affected mares, CurcuVet® induced significant downregulation of IL-1β and IL1RN (IL-1 receptor antagonist) genes. In foals, the downregulation was significant for COX2, TNFα and IL1RN. This shows the suppressing effect that curcumin can have on pro-inflammatory cytokines.

A similar study was performed with a group of different breeds of dogs: 6 dogs were healthy and 12 suffered from osteoarthritis7. The affected animals were given either CurcuVet or firocoxib (a common NSAID) for 20 days. Using a 44K oligo microarray, the researchers investigated the differences in gene expression in the healthy (control) group and the treated groups. Both NSAID and curcumin treatment reduced expression of pro-inflammatory cytokines such as TNFα. Moreover, the curcumin group showed a reduction in IL18 expression, as well as upregulated IkB (inhibitor of NFkB).

Similar results were observed in another recent study performed by the same research group, in which 18 dogs with arthrosis were treated with CurcuVet8. The data from these studies demonstrates that CurcuVet has proven anti-inflammatory effect in dogs and horses, and that could be a complementary therapy for arthritic pets. 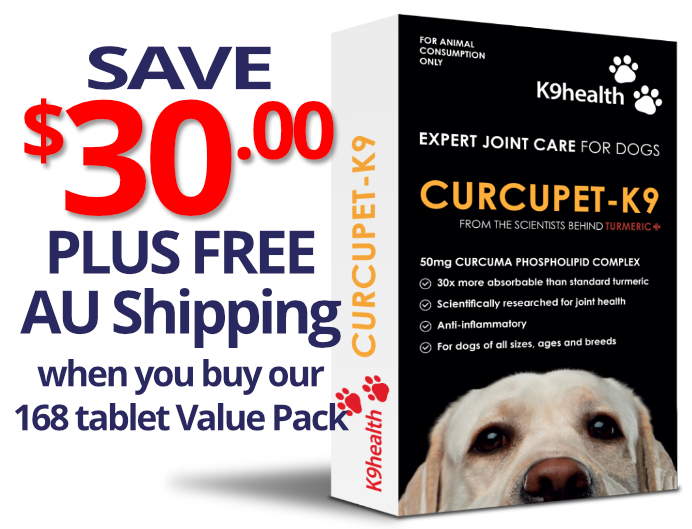 "It is tremendous to see her now. You can see the relief in her face. She now wants to go out with the other two dogs. It’s all down to quality of life."